I have found a new favorite music streaming App for my iPod. It is called Songza. The great thing about listening to music on Songza is that rather than being restricted to listening to the music you happen to own in iTunes, or listening to music based on genre, artist, or album, you are given the opportunity to listen to music chosen by "Music Experts" based on the time of day and the mood you are in. I have found that when listening to Pandora or Last.fm, for example, I begin to hear the same songs over and over. With Songza, I am listening to new artists and new songs that I have never heard before.

Songza is available for the iOS Apple devices such as iPhone, iPod, and iPad. It is also available on Android and on the Kindle Fire. It will also work from within any browser at http://Songza.com. I was surprised when I searched for Songza on Google, I was able to go to http://Songza.com/ and it recognized that I was Brian Mason. It obviously used my Facebook sign-in because my Facebook profile picture appeared next to my name. 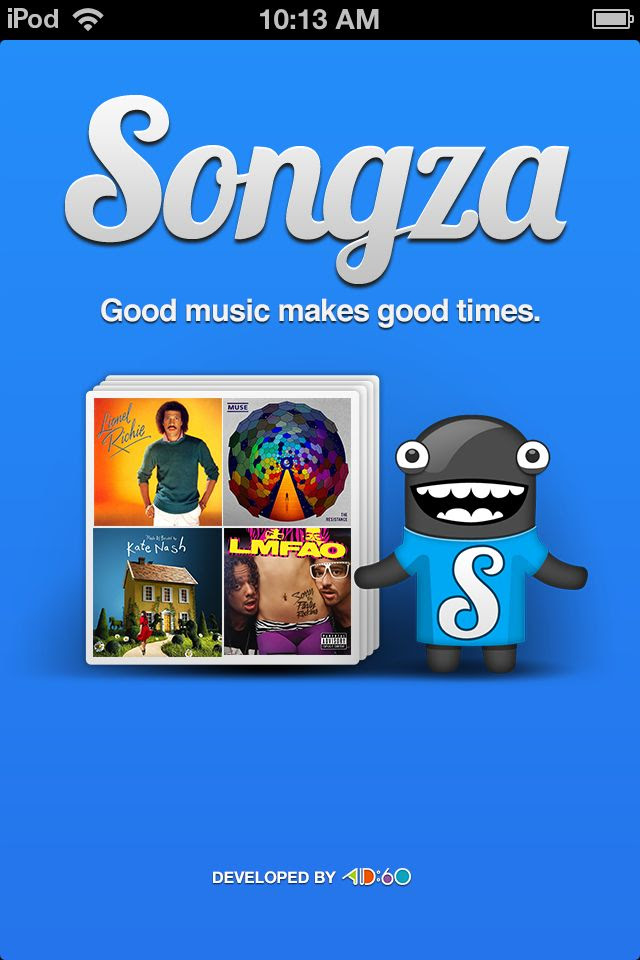 The title screen on an iPod Touch

When you open Songza in your browser there are three tabs: Music Concierge, Popular, and Browse All. There is also a search box.


The Concierge is the most exciting part about Songza. Based on the day of the week and the time of day you are presented with a major environment to start with. For example, on Saturday night the choices were: Bedtime, Entertaining Cool Friends, a House Party, Getting Lucky, Sweaty Dance Party, and Coming Down.

Based on what is going on in your life at the time, you select one. Then you are presented with sub-environments to choose from. For example, under Bedtime the selections were: Acoustic Bedtime, Soothing Voices, Hypnotic Electric, New and Old Bedtime Favorites, Sleepy Indie, and Dreaming Indie.

If you chose Soothing Voices from that list, there were two selections to choose from: Ladies Singing You to Sleep, and Men Singer-Songwriters. 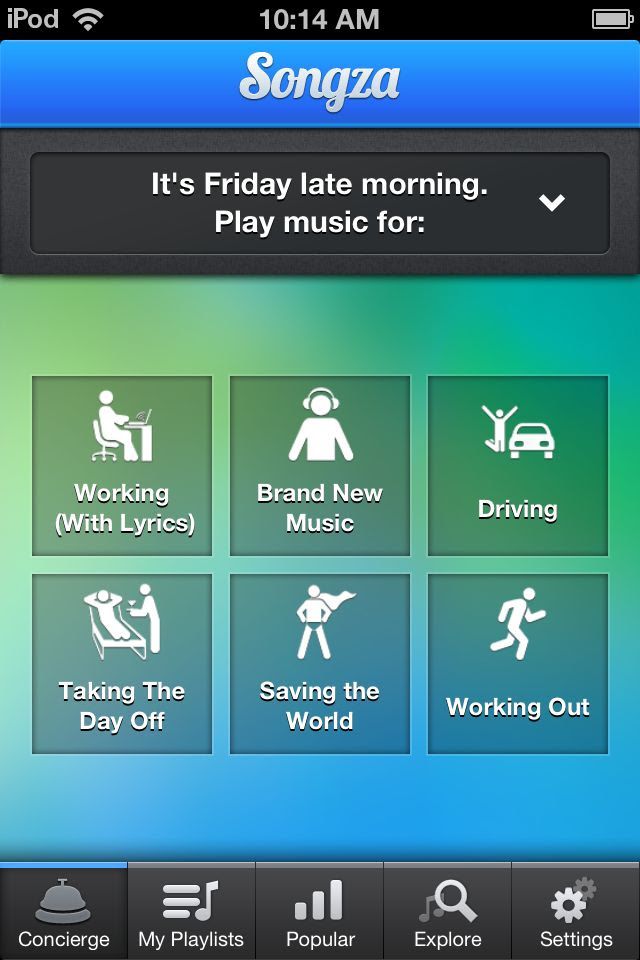 The Music Concierge screen on an iPod Touch

When I pulled out the application on Sunday late night I had six choices: Bedtime, Studying (no lyrics), Unwinding, Popular Genres, Reading, and Brand-new Music.

When I chose Bedtime from that list, the sub-choices were: Acoustic Bedtime, Soothing Voices, Hypnotic Electric, New and Old Bedtime Favorites, Nature Sounds, and Quiet Jazz. So you can see that the choices under Bedtime were similar, but they were not all the same as they were for Bedtime on Saturday night.

If I would have chosen Unwinding instead of Bedtime, the choices were: Mellow Indie, Sophisticated Art Pop, Great Singer-Songwriters, Relaxing and Eclectic Mixes, Atmospheric Indie, and An Evening At the Beach.

Other Ways to Find Music 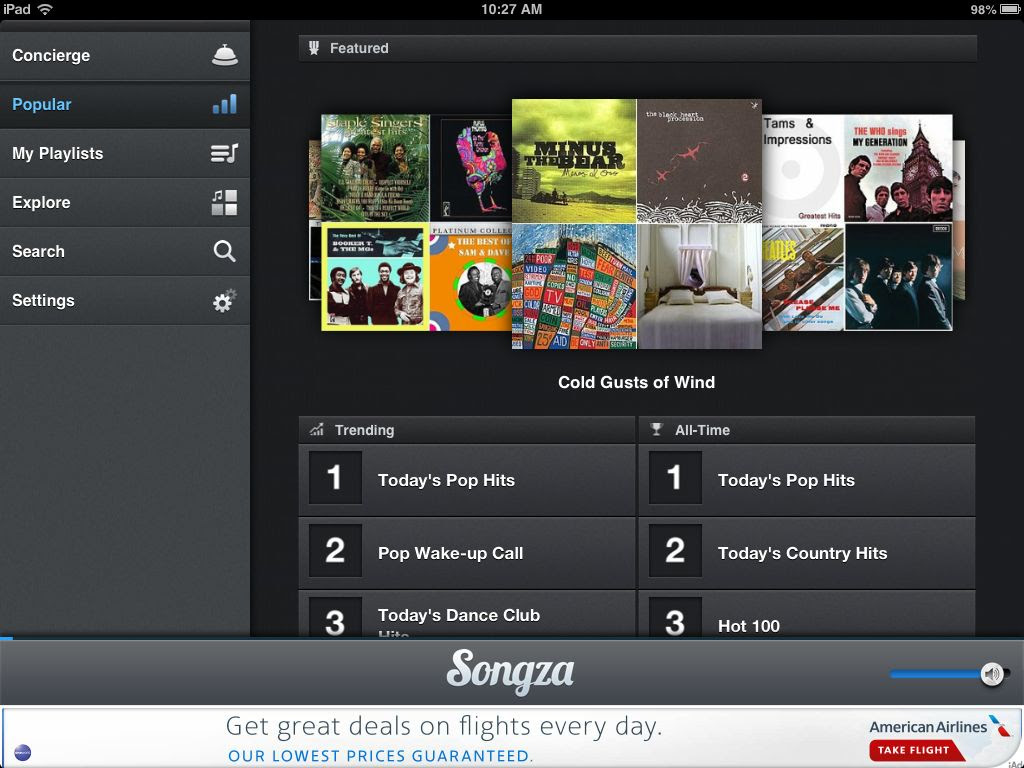 The Popular tab selected on an iPad

Under the Browse All tab you have six other tabs, Genres, Activities, Moods, Decades, Culture and Record-store Clerk.

If you decide you want to listen to music based on the genre, there are plenty to choose from all the way from "Blues & Blues Rock" to "Showtunes". 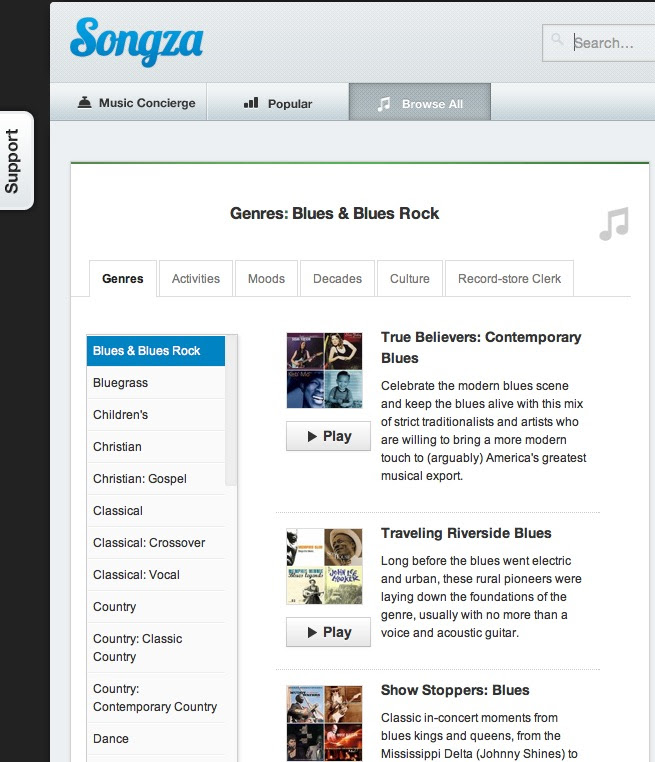 Or you can select the music you want to listen to based on activity, from "Ballroom Dancing" to "Yoga". If you want to listen to music based on your mood, you can choose moods from "Aggressive" to "Warm". Music by decade goes back to the 1930's, but the 60's, 70's, 80's, and later are broken up into two to four sub-groups. Cultural classifications include, for example, "Today's hits", "iTunes charts","Award Shows", "Best of lists", various holidays, television, and video games.

The search box will help you find playlists based on your search term. For example, I entered "Enya" and was presented with playlists "that prominently feature Enya" such as "New Age Yoga", "Gilmore Girls", and "Music from Martin Scorsese Movies".

You can contribute your own playlists to Songza. This will allow people to listen to music that you created in your playlist. However there's a note that says, "Due to licensing restrictions, playlist contributors cannot listen to their own playlist, but everyone else can."

I do not know how often the songs within playlists change, but Songza will provide you with lots of opportunities to explore music and find music you will enjoy.

Comments are moderated mostly to avoid flame wars. I will try to get comments up within 24 hours of receiving them.